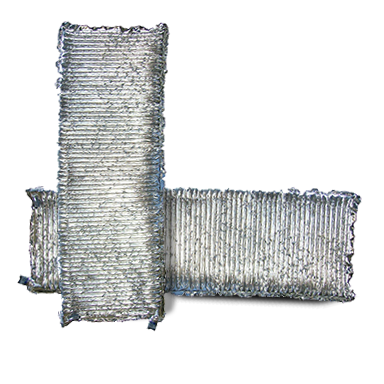 Our GFP technology delivers superior insulating capabilities, while offering distinct advantages over conventional insulation products. Funded by a grant from the U.S. Department of Energy, researchers at the Lawrence Berkeley National Laboratory developed GFP thermal insulation technology, which can be used in a host of thermal and acoustic applications in industries ranging from packaging to transportation, aerospace to building. GFP technology consists of multiple, honeycombed layers of thin, low-e metalized aluminum. These baffled polymer chambers are enveloped by a sealed barrier and filled with either air or a low-conductivity gas. The same proven technology is also used in low-e double- and triple-paned gas filled windows. Fi-Foil licensed this GFP technology and perfected the manufacturing process for large-scale production. The company now holds the exclusive licensing rights to GFP technology for use in residential and commercial insulation applications. GFP Insulation is being modeled in military tent applications to reduce energy use and was featured on a prototype floor of advanced sustainable products in New York. GFP won “the insulation product of the year” at the 2011 Global Insulation Conference. GFP Insulation was also featured on the History Channel as an advanced insulation. Proven Performance. Fi-Foils advanced GFP technology out-performs conventional insulation by many measures, and has been tested in accordance with international ASTM standards. What makes GFP technology even more attractive is its versatility. Its defining features include: High thermal performance. Able to achieve a variety of R-values using different gases. Maintains R-value over a wide temperature range. Sound. Excellent sound transmission class ratings. Compares favorably with other industry standard insulation products. Compact. The unexpanded product is nearly flat for easy storage and transport. Adaptable. Available in a variety of thicknesses and lengths based on your application. Moisture resistant. Retards moisture and resists mold growth. Clean and safe. No itchy fibers; safe for the installer as well as the home and building owners. Gases are inert and safe for the environment.

See how GFP Insulation can enhance your building envelope.

Is the calculated R-value based on the ASHRAE Fundamentals Handbook?

Yes. The ASHRAE Handbook values are a subset of data from the National Bureau of Standards (NBS).

How does reflective insulation impact the three modes of heat transfer; Conduction, Convection, and Radiation?

What is reflective insulation?