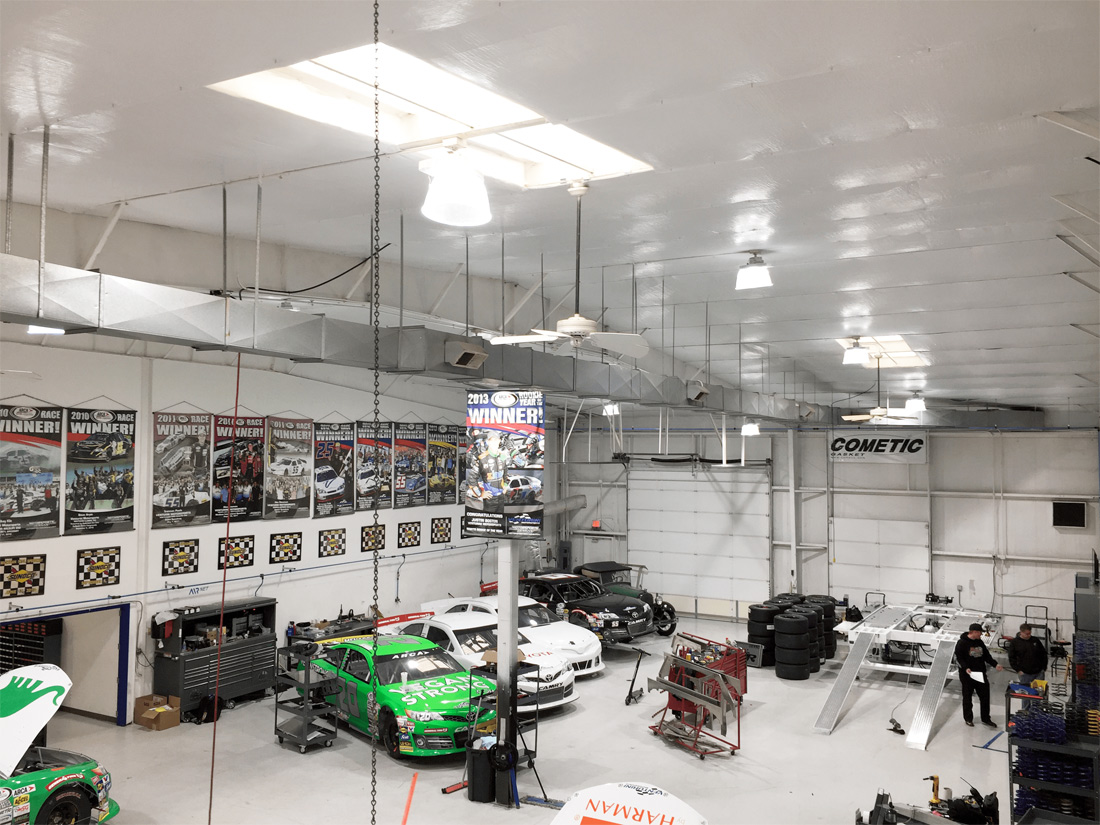 
Bill Venturini is a legend in the racing world. A former NASCAR champion and two-time Automobile Racing Club of America (ARCA) Racing Series champion, he holds the all-time qualifying records at Daytona International Speedway and Talladega Superspeedway. He’s also known for including women drivers on his teams and having the first all-female pit crew in professional motorsports.

His company, Venturini Motorsports near Charlotte, NC, includes the longest-running professional ARCA racing team in the nation, as well as a garage area and a race car showroom.

When the insulation that had been in the building since it was put up more than 20 years ago began to fail, Venturini needed a solution that would be attractive, cost-effective and energy efficient.

He first trialed some spray foam insulation installed in the paint booth area and was unhappy with both the appearance and the price.

Fi-Foil’s RetroShield® offered the characteristics and the look Venturini wanted.

“I wanted to reinsulate the building and didn’t want to remove my roof,” Venturini said. “Then I saw what these guys (Fi-Foil) had and I liked the looks.”

Venturini said the most significant advantage was the ease of installation.

“They used the steel girders that were here,” he noted. “There was no downtime for me.”

RetroShield® is a reflective insulation system suitable for metal building retrofits and new construction. Its patented Clip & Pin components allow it to be installed in one pass.

Clip & Pin components attach easily to the lip of the purlin, joining the insulation system to the building’s frame without the need for glue, cables, additional framing or other alterations. The system ensures long-term stability and performance while offering a look professional enough to be used as the finished ceiling.

RetroShield® brightened and improved the appearance of the Venturini showroom and garage area, reduced the noise level and made the workspace more comfortable year-round.

Pleased with the ceiling’s new look, Venturini is also looking for savings in his energy usage. Though he hasn’t been able to compare year-to-year bills yet, he said he has already noticed some changes in the comfort level of the building.

“I never could keep it in the 70s before,” he said. “Now the air conditioning turns off during the day at 72 (degrees).”

RetroShield® provided an easy continuous insulation solution to reduce thermal bridging at the bottom of purlins.

“I’m very happy with it,” Venturini said about his attractive new RetroShield ceiling. “It makes the building look a whole lot cleaner.”

Have A Project In Mind? Let's Talk.